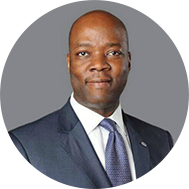 Patrick Akinwuntan qualified as a chartered accountant in 1988, after completing his professional course from the Institute of Chartered Accountants of Nigeria (ICAN). Thus, Mr Patrick is currently an ICAN fellow. In the year 2000, he went for a Senior Executive Programme (SEP) at the Harvard Business School. In September 1987, Patrick Akinwuntan got a job with Ernst and Whinney, now Ernst and Young International. He worked as a supervisor in the financial department of Ernst and Young, till 1991, when he left the company to start a new job at Merchant Bank Plc, Lagos. Mr Patrick commenced his career with the Credit and Marketing department of Merchant Bank. After a while, he was promoted and he became the Deputy Manager – Corporate Finance, of Merchant bank. Mr Patrick left Merchant Bank in 1993, to commence a new role as the General Manager of Spring Fountain Management Consultants, Lagos. In 1996, he then moved to Ecobank. He started as the Head of Commercial Banking. Mr Patrick served as the Head of Commercial Bank for 3years. Following that, in 1999, he became the Group Chief Finance Officer (CFO). As he advanced, he became the Executive Director of Retail Banking, Ecobank Nigeria, in 2001.

Mr Patrick served in this capacity till 2006, when he was appointed Group Executive Director of Operation, Technology of Transaction Banking, and Retail Banking. It was at this time that the bank moved from the ambition of being present in 13 countries to being operational in 30 countries. in 2011, he became the Group Executive Director for domestic banking. As the Executive director, he had the responsibility of managing the bank’s consumer and commercial business. He functioned in this capacity until 2015 when he became the Group Executive for Consumer Banking of Ecobank. As the bank’s group executive, he was responsible for the bank’s consumer banking business across its global network, which consists of 40 countries. While he was the Group Executive, Ecobank won several global awards. As such, when it was time to appoint a new Managing Director to replace Mr. Charles Kie, the bank’s former Managing Director, Patrick Akinwuntan, was the best fit for the job. In July 2018, Patrick Akinwuntan was appointed the Managing Director and Regional Executive of Ecobank Nigeria.