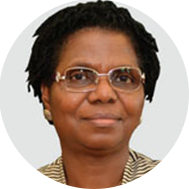 Mrs. Gloria Osezua, Executive Vice Chairman, Owel Farms and Industries Limited, a subsidiary of Owel-Linkso Group Limited. She holds a degree in Business Administration, majoring in computer science from Texas A&M University in Kingsville, Texas USA. On returning home to Nigeria in 1982, Mrs. Osezua joined the then NITEL after her National Youth Service. Haven worked for thirteen years, she voluntarily retired as Manager (System Analyst) in 1996. In 1997, she joined the family group of companies where she became the Managing Director of Owel Industries, the first indigenous industry in her hometown, Esan Land in Edo State. She has over twenty-five years work experience as a computer analyst with NITEL, and as an industrialist. Mrs. Osezua is also an alumni of the prestigious Lagos Business School (LBS) of the Pan Atlantic University (PAU) haven attended the “Growing Your Business and Turning Strategy into Action.” She has a diploma in “Family Education and Advisory” from (originally, the Villanueva University Centre, Spain) the Lagos Business School in collaboration with the Institute for Work and Family Integration (IWFI).

At IWFI, Gloria is both the Program Developer and Director of Married Couples Retreat (MCR), a program for married couples which addresses issues of strong family structure development. she also coordinates courses in the institute aimed at training teachers and individuals in the areas of family advisory as a trained family advisor. She has given several lectures on Marriage and Family to several audience both at home and abroad. With her passion for putting meaning into the life of others, she runs the Extended Family Initiative and Educational Trust (EFIET), a not-for-profit organization, established to cater for educational and economic empowerment of needy individuals in her community and more.

Gloria is on the Board of several companies, and a member of many professional bodies, one of which is the Nigerian Businesswomen Forum (NBWF). Runs family programs such as the “Family Enrichment Program” and coordinates marriage preparatory courses for young intending couples. She is passionate about stable and healthy family life. She is married with children and blessed with many grandchildren.