Marriage is one of the oldest and most enduring institutions in human societies. It has survived and thrived through wars and peace, economic crises and prosperity. Marriage is the foundation of family life, and therefore human society. Family is the building block of society. Despite its long history and resilience, reality today is that the health and quality of marriages and families have been negatively affected by events in society. Based on the high rates of divorce and widespread marital problems in his American society, the renowned marriage counselor, James Dobson once described marriage as “an institution under fire” of which battle must be won if all must go well with humanity.

In reaction to the myriad of problems confronting marriages and families today, the Institute for Work and Family Integration (IWFI), in the last 15 years, has developed interventions and Programme towards “quenching” the “fire” hovering around marriages and families in contemporary times. The institute conducts research, makes advocacy and organizes counselling with a vision to stabilizing society through the dimensions of “work” and “family” domains – the two places where people spend the greater gamut of their life.

A recent study conducted among participants at the Institute’s highly acclaimed Married Couples’ Relationship (MCR) Programme revealed the dissatisfiers which generally diminish the health and stability of marriages and families. Table 1.0 shows a graphical representation of problems that were prevalent among married couples. 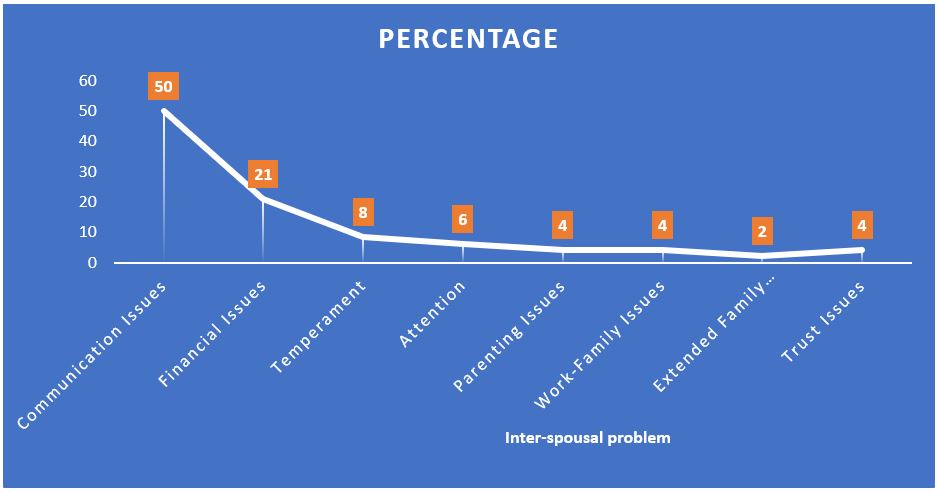 Our study results (Fig. 1) revealed that issues bordering on poor communication (50%) constituted majority of the leading problems that spouses had with their partners. Next to this were: financial problems (21%), temperament (8%), attention (6%), parenting issues (4%), work-family issues (4%), extended family issues (2%) and trust issues (4%). Generally, these problems constitute clogs in the smooth running of relationship between couples.

Conflict and resolution among married couples

Conflict is an inevitable and common occurrence as long as people’s divergent values, interests, goals, habits and conducts collide. Conflicts are even more prevalent and unavoidable in a spousal relationship owing to the “compulsive social proximity” (Adegoju 2009:58) that characterises such a relationship.  The two persons that make up a couple, that have committed their lives to each other through marriage are individuals from different backgrounds, having different interests, philosophies, values and habits; yet, they necessarily have to live together relatively permanently. This makes conflict an inevitable part of relationships. While conflicts are not uncommon in a spousal relationship, the ways and manners married couples handle their differences and conflicts can make or mar their relationships. In order to keep the spark in a spousal relationship, couples must be willing to face their problems “head on” and be opened to changes and compromises.

As part of interventions for marriage and family, the IWFI offers a weekend marriage therapy for supporting spouses in making their marriage work optimally: the Married Couples’ Relationship (MCR) programme. The programme helps couples understand self and spouse while addressing factors such as temperament and communications among other root-causes of interspousal conflict.

Subsequent editions of the IWFI monthly newsletter will address the problems affecting inter-spousal relationship among married couples, as revealed in the survey presented above, with possible strategies that you could adopt in addressing identified problems. We invite you to watchout, read and enrich your marriage and family as IWFI commits to building better families, businesses and societies.